This painting suffers from dirt particulates that have accumulated on the surface and in the layers of the older varnish. The paint film is dry, which is not surprising for a painting this old (1778). Dryness has led to craquelures and cupping. The canvas appears to be brittle, thin and dry.  There are numerous instances of old restoration and a coating of  asphaltum on the reverse.

This painting is the work of Francois Beaucourt (1740-1794; also known as Francois Malepart De Beaucort) who is known as the first Canadian artist to receive European training. His father was also a painter, and was likely the first teacher of Francois, though records at the time are hard to come by. What is known is that the father, Mallepart De Grand Maison, was a soldier who was believed to have gone to New France with the colonial regular troops. At this time, New France extended from Northwest Canada down to New Orleans, spanning into the present day Midwest, and skipping the Atlantic seaboard, which was controlled by England. Mallepart married in 1737, the wedding certificate described him as a “sergeant in the troops of the company of M. de Beaujeu [Louis Liénard].” It’s believed that by 1740 he had given up the military career to become a painter: the Montreal baptismal papers for his four children describe him as a painter. The first born was Francois, and subsequently the only living child of the marriage. Mallepart died 17 years after Francois was born, and his wife remarried to Corporal Lasselin, who may or may not have relocated the family to France. However, it was in Bordeaux, in 1773, where Francois married Benoîte, the daughter of Joseph-Gaëtan Camagne, a theatre artist and decorator.

Eleven years later, Francois departed for America; unfortunately, all the artwork he created in Bordeaux has been deemed lost. The next known trace of the artist was in 1792 when he surfaced in Philadelphia and published an advertisement in the General Advertiser. The same advertisement would appear in the Montreal Gazette, but in this case he changed the description of himself from a French painter to a Canadian one. Francois would go on to create a substantial amount of religious paintings and portraits, and it’s the latter where his talent seems to have found its strongest definition: his warm colors imbuing the subjects with a life-like quality. 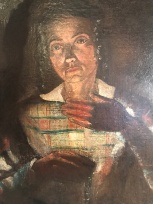 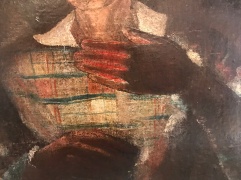 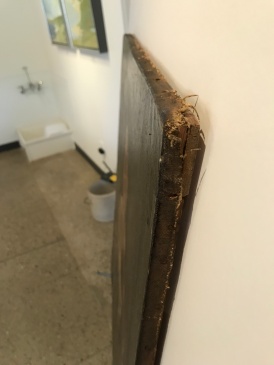 The signature and date is difficult to see.

A higher angle helps to add some definition to the writing.

The reverse held up to a light.

The front held up to a light.