At the Palace of Versailles, The Great Stair, also called the Abassador’s Staircase, was built in 1674-1679 to provide a ceremonial access to the king’s state apartment. Its walls and ceiling were lavishly decorated under the supervision of Charles Le Brun. Polychrome marble, gilt bronzes, and paintings all lit by its glass roof were some of its features. The decor celebrated the victory of the king in the Dutch War (1672-1678) and, on the landing, several illusionistic paintings celebrated the military glory of Louis XIV. Unfortunately, in 1752, to renovate in favor of additional apartments for Louis XV’s daughters, The Great Stair was destroyed. Only one painted panel escaped destruction, but a complete visual record in black and white exists thanks to more than thirty large and intricate prints created between 1679 and 1725.

Coinciding with the construction, an extravagant publishing project was undertaken that would become known as the Cabinet du Roi (King’s Cabinet). Colbert, the kings Minister of Finances, supervised the project collecting the best French printmakers to produce hundreds of large and detailed engravings of the royal collections and accomplishments. Beginning in 1670, some of these print series were combined with descriptive texts and published as books, while others remained without text and were bound and distributed as needed.

This copy of The Cabinet du Roi is believed to have been made around 1710. It does contain a number of expected maladies: staining, fungal invasions, and fingerprints. However, the paper quality is phenomenal and it will clean up exceptionally well. The book totals about 90 pages, of which 22 two-page spreads contain prints. A number of these are in shapes that fit together, comprising an outer circle with a central image. The plan is to deconstruct the book, restore the pages, and create a box frame to showcase the entire production. A reproduction of the shaped images fitted into place will be produced separately and presented as its own image. 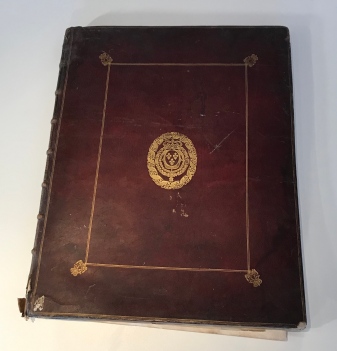 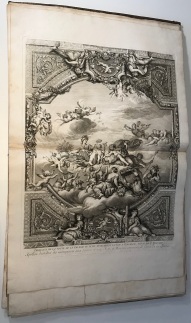 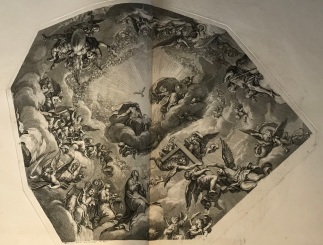 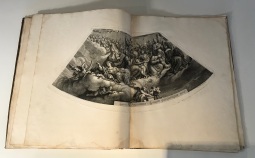 This book came in with several deterioration issues including pages that were very brittle and stitching that was failing. Also, the cover boards were lost and the leather spine was gone.

For this rather substantial volume it was necessary to de-acidify every page. Restoration of the spine was also an intensive process as it involved a series: fabricating new archival parts, glueing, and pressing under blotters. Fortunately, once it was done, we were very happy with the strength and appearance, the former giving it a condition that will allow it to be opened by grandparent hands and little grandkid hands for years and years to come. 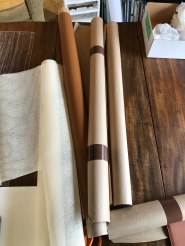