This landscape by Manfred Henninger (1894 – 1986) had previously been re-lined with wax, which is a technique that is seldom needed these days, and this instance of it had failed. On the front there were some cracks in the paint film, which were due to excessive drying.

It was a slow, and noisy, process to remove the old wax reline; but, careful scalpel work eventually got rid of it. New Belgian linen was added with a restorer’s adhesive. This fortified the foundation, which is going to greatly help the underlying issue as to why the cracks in the paint film appeared in the first place. Consolidation brought the cracked areas back to plane. Small, hairline losses were then in-filled and in-painted. There were a number of losses around the perimeter, which were the result of tacks that had been placed, we believe, to help hold the canvas for the wax re-line. This effectively shrunk the size of the painting, but with our new linen, providing a wider hold for the stretcher bar, we were able to undo this.

Born in Backnang, Germany, Henninger studied at the Stuttgart Academy of Fine Arts where Christian Landenberger, a notable landscape artist, was then a professor. With the outbreak of WWI, Henninger volunteered, but he never would never have the taste for war, and thereafter he considered himself a pacifist. In 1929 he co-founded the Stuttgart New Session, which abolished the jury system that had traditionally decided which works would be shown at exhibitions. For political reasons, Henninger emigrated to Switzerland, and then to Ibiza, an island in the Mediterranean which is said to have inspired a flurry of work, some 300 paintings. But war broke out in nearby Spain, and Henninger moved to Ticino, an italian-speaking region of southern Switzerland. Henninger went on to write essays for “Leaves for Art” in which he critiqued French Impressionism. In 1949 he was appointed to the State Academy of of Fine Arts in Stuttgart, where he led the classes for landscapes and portraits, teaching until 1961. His notable students included: Peter Kalkhof, Günther C. Kirchberger, Roland Ladwig and Friedrich Sieber. By the end of his life, Henninger had received many honors: in 1962, he became an honorary member of the Stuttgarter Kunstakademie; in 1975, he received the merit medal of the state of Baden-Württemberg; in 1979, he was given the Bürgermedaille of the city of Stuttgart and the Great Federal Service Cross; and in 1985, he was awarded the Hans Thoma Prize. He died, in Stuttgart, in 1986. 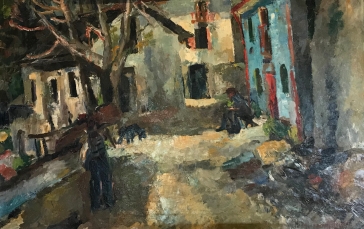 First you heat the wax.

Once it’s soft, the scalpel, with elbow grease, does the rest. 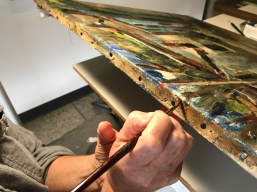 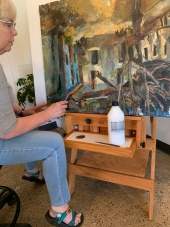 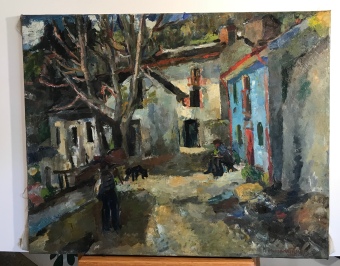 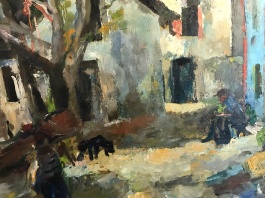 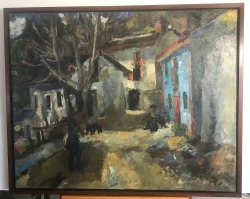