This is the second Robert Wood (1889 – 1979) painting we’ve had in studio. This one has a substantial coating of tar and nicotine, and in the sky area, where the paint is thinner, some areas of loss were minor hits have occurred. Along the perimeter, where the stretcher bar pushed the canvas against the frame, is a crack in the paint film.

Stronger than usual chemicals were needed to remove the tar and nicotine. On the reverse we applied a restorer’s chemical to clean and hydrate the painting. Cleaning to the front has had a stunning effect. Wood was known for his Bluebonnet paintings, and you get some of that blue in the sky. Cleaning also reveals the intimacy of the brushstrokes and reveals the technical ability of Wood.

After in-painting, re-stretch, re-fit and conservation varnish, this painting will be all done. Stay tuned for more, the transformation photos are sure to be remarkable.

Robert William Wood was one of the most prolific landscape painters in American history. His career spanned several decades. Regions he is most known for include the Texas hill country, the California cost, the Rocky Mountains, upstate New York and the Sierra Nevada.

Wood’s success was unusual in that he did very little promotion of his own work. Instead he placed faith in the natural appeal and time-enduring qualities that strove for, dedicating himself to his craft.

He was born in Sundgate, Kent, England, and immigrated to the United States in 1910. Subsisting on odd jobs and traveling heavily, Wood, along with his family, finally settled for a time in San Antonio, Texas where he became a pupil of Jose Arpa, a Spanish painter who studied at the Seville Academy.

Wood’s style began in the vein of 19th century English Landscape and evolved to include impressionist brushstrokes and more vibrant colors. Robert Wood continued to paint until his death. He died in Bishop, California. 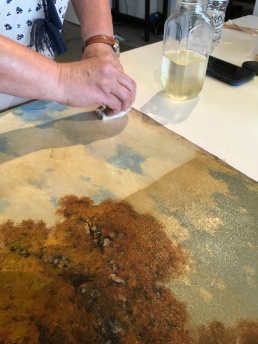 Major shift in colors once clean.

In-fill applied to areas of loss.