The Inn at St. John’s is a luxury boutique hotel and golf resort in the Metro Detroit area. The centerpiece is a wonderful and breathtaking display of old-world craftsmanship, the St. John Chapel. A pair of corridors lead to the entrance, and both are ordained with coffered ceilings that are in need of a bit of repair.

With The Inn at St John’s temporarily closing its doors for the pandemic, the situation subsequently provided the ideal, isolated work-environment for the restoration of these ceilings, a project we were very happy and excited to win.

Work began with thorough cleaning and then transitioned into a condition assessment.

Besides areas of loss, deterioration, and crawling paint with craqueleurs, conditions you would expect to find, we also discovered that the two corridors differed in terms of the finish technique and the color schemes.

The Inn was originally a Provincial Seminary, conceived in 1936, but due to WWII, not constructed until about a decade later. Cardinal Mooney was the forerunner of the stylistic choices, of the Romanesque archways, wide-open spaces, and the grand bell tower. In 1949, classes began, and the seminarians even built their own golf course, and they could play the course as long as they had worked at least 60 hours per yer in maintaining it. 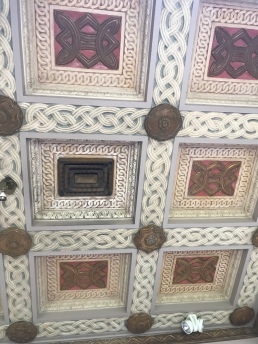 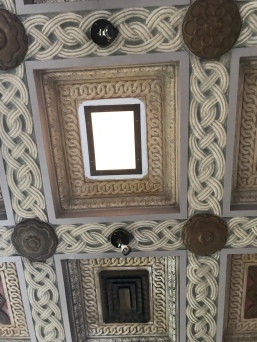 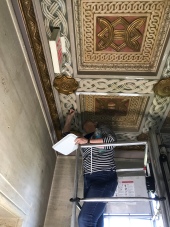 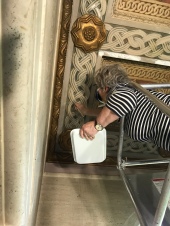