After the re-line and re-stretch this Krasner painting has been rather cooperative with the restoration. The previous stretcher bar was too narrow, and it clipped about half an inch from the right and left edge. So far the crease marks left behind are all but gone, and only a minimal amount of in-painting will be needed. Frame ideas are still being discussed will the client but we’ll share photographs once it’s finished.

Born to a Russian immigrant family living in Brooklyn on October 27, 1908, Krasner decided early on to pursue a career in the arts. Enrolling at the Cooper Union in 1926, the young artist struggled to find the appropriate artistic milieu to encourage her talent. Beginning in 1928, she studied for a brief time at the Art Students League, then at National Academy of Design from 1928-1932, and subsequently at City College in 1932-33, where she obtained a teaching certificate. However, the teachings of the influential artist Hans Hoffman at his renowned school in Greenwich Village had the greatest impact on Krasner’s artistic development.

In the 1930s, Krasner became acquainted with Harold Rosenberg, who would become one of the most influential art critics of his generation. In 1934, Krasner was appointed to the Public Works of Art Project, and the following year she and Rosenberg were assigned to Max Spivak’s mural project (for the Federal Art Project [FAP]).  Their positions—more as de-facto personal assistants than artistic collaborators on the project since Spivak preferred to work alone—allowed for ample conversations and lively debates about art, leftist politics, and intellectual developments. Rosenberg, an aspiring poet, introduced her to the work of Baudelaire and Arthur Rimbaud.  The French Symbolist poet Rimbaud provided a tremendous source of inspiration for the artist, particularly in his poem “A Season in Hell,” which Krasner excerpted and inscribed on the wall of her studio in 1941.

In 1940, Krasner joined the American Abstract Artists (AAA), a group dedicated to creating international abstract art whose slogan announced their aims “For Peace, for Democracy, For Cultural Progress.” Her participation in AAA exhibitions from 1940 to 1943, her outspoken attitude and involvement in protests organized by the Artists Union, and her affiliation with Hofmann’s school increased her reputation in the early 1940s. She received a public mural commission for the New York radio station WNYC (which was never executed), and also participated in several group exhibitions. These included French and American Painting, a show organized by John Graham that opened in January 1942 at McMillen Inc. design studios.

French and American Painting marked the first occasion where Krasner and Pollock exhibited their work in the same show. Indeed, after receiving the offer to participate in the exhibition, Krasner visited Pollock’s studio to introduce herself, not realizing that she had had met Pollock previously. In 1945, the couple both contributed paintings to A Problem for Critics at Howard Putzel’s Gallery 67.  They were married later that year in an intimate ceremony in The Springs, Long Island, where they had purchased a farmhouse not far from the home of Harold Rosenberg and his wife May Tabak.

In 1946, Krasner launched her Little Image series, which got their name from how little her studio was. These paintings incorporated an all-over compositional technique using variously short dabs, dense webs of dripped paint, and grids of ciphers and hieroglyphic forms. The Little Image paintings were informed by Krasner’s religious training as a child, when she learned Hebrew, and also by post-war Zionism.  More broadly, Krasner’s calligraphic paintings revealed the artist’s exploration of symbols and sign systems; she explained, “I thought of [my unconscious messages] as a kind of crazy writing of my own, sent by me to I don’t know who, which I can’t read, and I’m not so anxious to read.” It was a period of artist growth that Krasner said she was waiting for something to happen, confident that the repetition of familiar pigment and canvas would eventually make something. These works were not executed on an easel, but on the floor or a table. This marked the only time she ever worked looking down on her canvases.

In 1953, Krasner began to destroy both Pollock’s and her own work to generate small collages composed of the fragments of sliced canvases. The collages that resulted from this process of destruction and recombination displayed complex interlocking forms, realizing in both a material and visual way the tension of opposing forces encouraged by Hofmann years earlier. These works also reveal the painter’s appreciation for Matisse’s lively color. Krasner combined the principles of Hoffman and Matisse with her admiration for Cubist drawing.

Following Pollock’s death in 1956, Krasner responded with a group of works called Earth Green. The series featured monumental painterly explosions addressing themes of renewal, such as harvest, fertility, and growth. Sometimes referred to as “autobiographical,” these Abstract Expressionist figurative paintings often depict hybrid, gender-neutral personnages within carefully structured canvases that balance horizontal and vertical forces. In 1959 Krasner launched another series inspired by death. These works, referred to collectively as “Night Journeys” are part of her larger Umber series and are characterized by their limited palette of blacks, whites, ochres, and browns. Also distinctive are their mixed use of sprayed and spattered paint and the intense emotions they evoke. In 1958 Krasner also produced a large-scale mosaic for the Uris Building in New York utilizing some of the same forms as her collages.

In the mid-1970s, Krasner’s work came full circle. After rediscovering several portfolios of the charcoal Nude Study from Life drawings in 1976, she saved (and likely signed and dated) those she wished to keep, giving some as gifts to friends and colleagues. The remaining drawings she cut into abstract forms and sliced and pasted these fragments onto large canvases. Painting on top of the collage, she titled the series, Eleven Ways to Use the Words to See. These works expressed the artist’s interest in both Cubist design and Fauvist color, as well as her career-long engagement with drawing, painting, and collage.

That decade also witnessed the ascendancy of Krasner’s national reputation. Her work was exhibited in several major exhibitions that celebrated the varied aspects of her oeuvre, including Lee Krasner: Large Paintings at the Whitney Museum of American Art, organized by Marcia Tucker, and the traveling show Lee Krasner: Collages and Works on Paper, 1933-1974 initiated by the Corcoran Gallery of Art. Two other important exhibitions were Krasner/Pollock: A Working Relationship, curated by Barbara Rose, and Lee Krasner: Works on Paper at the Brooklyn Museum of Art.  After suffering from arthritis and battling various illnesses since 1962, Krasner died in 1984. 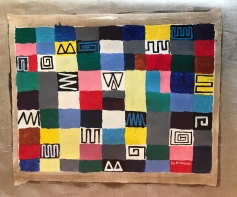 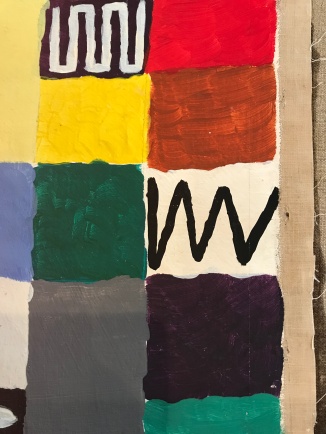 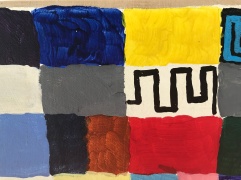 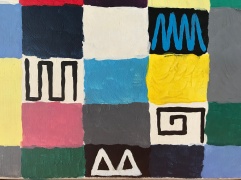 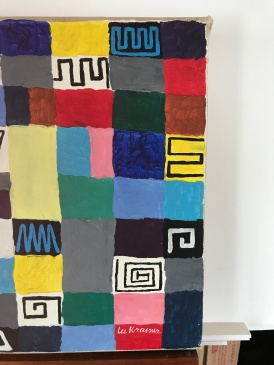 If you look closely at the right edge, particularly the red and sepia squares you can faintly detect the crease line.

On the left edge the crease is a little more obvious.