This watercolor came in attached to a cardboard mount that was completely wood-based pulp. It had contaminated the work with acid burning causing the overall look of the piece to be a dark brown. We carefully soaked the painting and slowly removed it from the mount while wet. We then put it through a series of purified water baths to extricate as much of the acid stains as possible; this was done without any chemistry so as to protect the watercolor. We then added a couple of baths with chemistry through the reverse of the picture to remove more of the acid stains.

There were three tears in the watercolor; two of which were at the corners due to stress and the brittleness of the acid degradation, while the third tear was also near the edge and looked to have been caused by the artist. Blotters were used to flatten and dry the watercolor, and then further de-acidification solution was applied, this time a non-aqueous type. We then tissue-mounted the work to 8-ply museum board, before another round of de-acidification, this time through the face. In-painting was conducted where there had been some loss of watercolor. Stay tuned for more as we prepare a custom American Modernist 5″ wide frame with light antique gold over yellow and black clay.

Born in Gusenburg, Germany, Mathias Alten (1871–1938) is hailed as the foremost painter of Grand Rapids, Michigan and a second-generation Impressionist whose primary theme was agrarian labor. He was apprenticed to Joseph Klein, a decorative painter in Saint Wendel, Germany and worked on ceiling and wall decorations for churches and theaters.

At 17, he emigrated to Grand Rapids, Michigan, which was a major manufacturing center and vital art community. He studied with Edwin A. Turner and first exhibited his work at the Michigan State Fair in 1896.  Some of his earliest works are floral stilllife, a theme to which he continued to return; he also did figure and portrait painting, but his landscapes defined the direction of his work.

In 1898, he went to France and settled in Paris after spending time painting fishing scenes in Etaples, an artists’ colony on the French coast. He studied at the Academie Julian with Benjamin Constant and Jean-Paul Laurens and won a gold metal for the best figure drawing. Interested in animal drawing, he attended classes at the veterinary school and then traveled extensively throughout France and Italy and other parts of Europe.

Returning to Grand Rapids, he and Constant Fliermans opened a studio and art school together, and then on his own he pursued an active career as a a portrait and figure painter, and also did numerous murals. His figure paintings were unusual for that time because they were not elegant subjects but working class people straining their muscles.

From 1902, after spending time at the Old Lyme, Connecticut art colony, he became increasingly devoted to plein air rural landscape painting with sparkling sunlight and colors of Impressionism. In 1910, he traveled abroad for a year, doing many rural scenes of Holland, and in New York, he saw paintings by and was much influenced by the Spanish Impressionist Joaquin Sorolla whose work became a lasting influence in subject matter and a palette that was more colorful and sunlit than his previous work. In 1912, he traveled in Spain, and much of his work from that time reflected Spanish subjects.

To escape the harsh winters he made trips to southern California in 1929 and 1933-34. His good friend Norman Chamberlain had settled in Laguna Beach. While visiting there he was active with the local art colony and painted coastal scenes and a series of missions. He achieved success in Los Angeles due to his daughter’s promotion of his works. 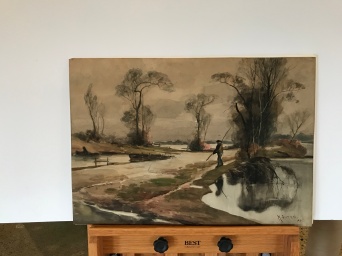 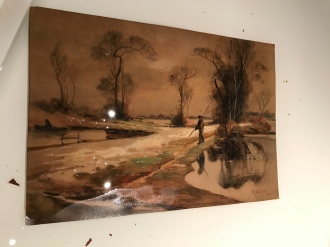