This abstract oil on canvas by Mainie Jellett (1897 – 1944) suffers from expansion and contraction, a layer of dirt contamination, which is derived from its great “texture” quality, and on the reverse, a patch from a previous restoration. Careful cleaning had to be carried out in a slower manner due to the texture of the artwork and its susceptibility to lifting even with cotton tips. A rolling technique was used instead of a swirling technique. This was a slower process but the amount of contamination we were able to remove was quite staggering. The original linen was a burlap linen fabric that was severely compromised and ready to fall apart. Consolidation was done to halt the deterioration, and then re-lining with new Belgian linen provided greater strength that will be essential for a painting with as much structure as this one. Around the edges, in-painting was done to conceal the places where the original diamond points held in the liner and caused damage.

Jellett used a two varnish system that depended on the different texture of the artwork. The two types were satin, that gives a shine and makes the colors pop, and matte, that absorbs light and diffuses the color. Using software we carefully labeled which varnish was applied to which texture in order to keep accurate what was intentionally chosen by the artist.

Bottom middle was where the tear had been. 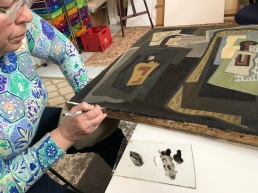