With the rental of a large, accommodating truck, the careful navigation of a tight stairwell, and French double doors opened all the way, the studio saw the arrival of this handsome and large portrait by the European artist, Eduard Charlemont (1848 – 1906). The portrait is roughly 57″ x 87″ and is decorated with a wonderfully rich and ornate frame, although it’s one that’s a bit dirty. There a few unfortunate tears in the portrait. A small one near the taller boy’s right arm, and then a sizable one along the shorter boy’s left leg. Another concern is the warping evident in the top right corner where the painting has pulled back from the frame. Once we set the painting on its reverse, we found work done by a previous conservation, some hole repair. We stripped the frame of its unnecessary wiring and removed the adjunct frame backing that’ll we replace later on with a more quality material. All the prep work has finished, and now the conservation will take over starting with a thorough examination. Stay tuned for more . . .

Labeled as a precocious talent, Eduard Charlemont studied at the Vienna Academy. Originally from Znaim, Moravia (Czech Republic), following his studies Charlemont traveled in Italy, Germany, and France, and did some studying in Venice, before settling in Paris during the 1870s. He was a regular exhibitor at the Salons, and won a gold medal at the 1889 Exposition Universelle.  In addition to his finely wrought genre scenes, Charlemont was sought after as a muralist.  His masterwork was three enormous panels for the Burgtheater, the Austrian National Theater in Vienna, each panel measuring almost sixty feet wide. 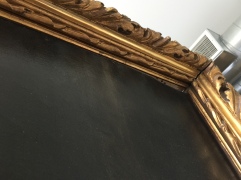 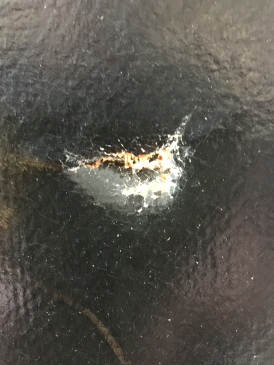 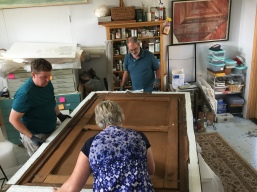 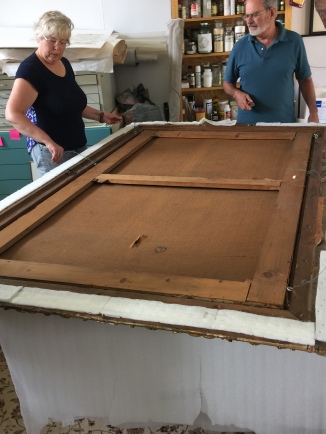 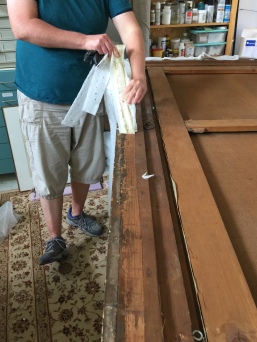